BALANCE SHEET:
Checking ( acct. 1008) We had a balance of $55,000 as of May 31, 2017. This includes $12,000 of advance payments of next year’s income. We will also be transferring some of the crypt funds out of this account at the end of the year.  A number of bills were paid in early June bring the balance down some. This cash will be needed for some significant repair bills coming in June.

Page 3 lists various funds which are restricted. At this point the current portion of most of our funds have been spent so the accounting and transferring of funds will be much less complicated.

INCOME:
Pledges (4010) are unfavorable by $2000, this is almost offset by “Augmented” pledges. When a pledger pays more than their annual pledge, we record those payments as “Augmented”. We budgeted for an unpaid amount of pledges equal to 6% of total pledges. I am hoping this is sufficient, however, after sending statements to a number of members with balances due, I am not optimistic.

A favorable variance of $5000 in other contributions (4200) makes up for unfavorable Auction and Rental income. Social Mission (4350) is favorable by $2400, this amount will be offset by contributions sent out before or shortly after yearend.

EXPENSES:
Minister’s Discretionary Fund appears to be unfavorable by $1000, this is not a concern as we have accumulated funds of $4000 from prior years that will cover this.

Music is showing an unfavorable variance of $2500, most of this will be covered by transfers from the Music Fund. Worship continues to be unfavorable, hopefully the increased budget for next year will prevent this from happening in the future.

Board and Committees is unfavoragle by $600 due to the printing of the Membership Celebration book, this will be covered by specail donations. While it’s nice of people to donate for such events, it makes it difficult to see where we are and I am not so sure this is a good way to operate.

Property Expenses are favorable by $15,000 due to the reserve in the budget for major repairs. This variance will be eliminated in June due to roof repairs ($2000), Little People’s painting ($6000) and Boiler repairs ($8400). I am estimating that electric and gas will end the year about $2500 over budget. This was a very mild winter, if we have a normal or severe winter, the reserve for major repairs will have to be used to cover utilities. We need new windows to keep our tenants happy but the payback will take many years.

THE BOTTOM LINE:
I am estimating a loss of about $6000 for the year. The Building area might hit their target, however, there was a hope that we wouldn’t have to spend the entire $15,000 reserve for repairs and it would offset overruns in other areas. We do a have a small cash reserve to cover this without spending any restricted funds. However, a more serious approach to spending in the future is needed. Our building will continue to be expensive to operate even with some improvements. 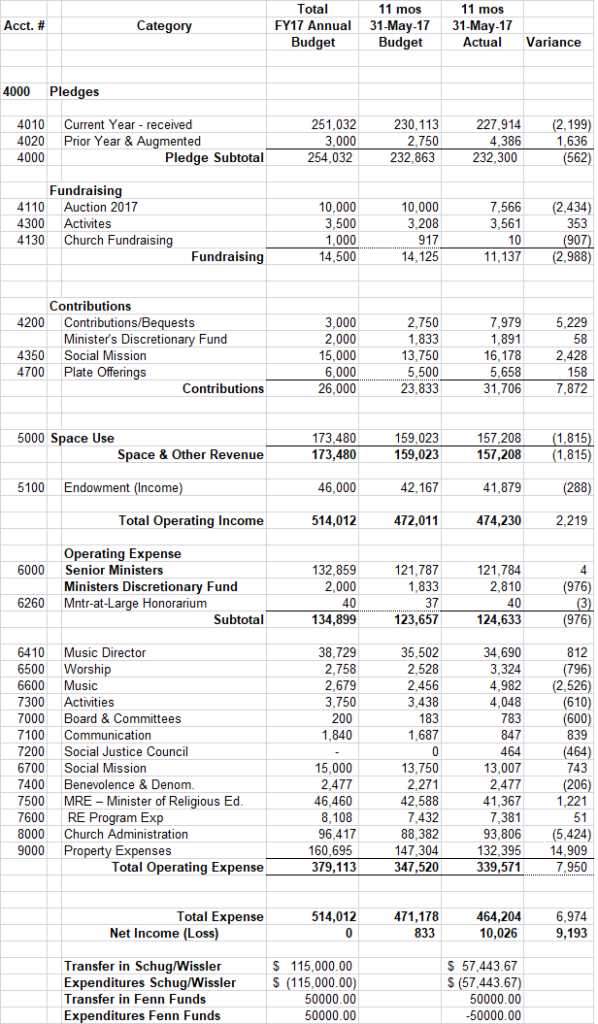