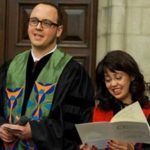 Teri and David Schwartz became our Senior Co-Ministers in August, 2013. They decided to become UU ministers some 12 years ago, while still in college–she at Brown, and he at Tufts. Subsequently, they both enrolled at Harvard Divinity School on September 11, 2001. Since graduation in 2006, they have been in ministerial formation in the Twin Cities. They came to First U because it is a well-established, urban, multiracial, multicultural congregation ready to grow to a new level of community building and citywide ministry. Learn more at their website: www.schwartzandschwartz.org 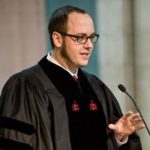 David, following a two-year internship (2009-11), was hired as the first Director of Small Group Ministry at White Bear UU Church (membership 770) while continuing his existing position as an Organizational Effectiveness Consultant at Target Corporation. There, he has developed expertise in change management, training and development, project management and innovation. 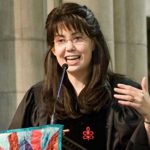 Teri served a one-year internship at Unity Church-Unitarian in Minneapolis (membership 960) under the guidance and supervision of the successful co-ministers of that congregation, Reverends Rob Eller-Isaacs and Janne Eller-Isaacs. For half of that internship she had the opportunity to serve as co-minister with fellow intern, Justin Schroeder, while the Eller-Isaacses were on sabbatical. She also served as a hospital chaplain during her internship and has continued in that capacity.