Our church is one of the oldest in Chicago, founded in 1836, only three years after Chicago was incorporated as a town. It began when a few young men invited a visiting Unitarian minister from Boston to talk to them and their friends in a hotel. As a result, they started our Society by adopting by-laws and planning a church building.

Itinerant ministers and missionaries served us in temporary quarters for three years until we called our first minister, Joseph Harrington, Jr. He was so devoted that he himself, on trips to the East, raised two-thirds of the cost of the building ($3,750). It was built in 1841 on the site of the Picasso figure in Daley Plaza.

But even though the American Unitarian Association helped our congregation by providing nearly one-third of Harrington’s salary of $1,040, we could not pay him what we had promised. So he left us in our new building after five years. 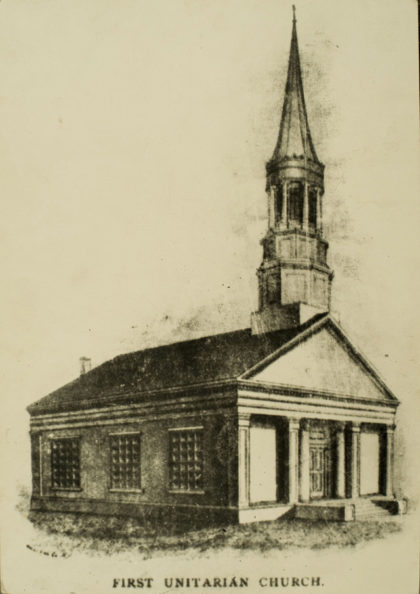 We were two years without a minister, and then called William Adam, a former Baptist missionary in India for twenty years. He filled the church, and the Society informed the American Unitarian Association that we could now be self-supporting. However, within three years the congregation had financial difficulties again, and Adam departed our Eden in 1849.

We soon called our third minister, Rush Rhees Shippen, age 21 and the first student who had enrolled in the new Unitarian seminary in his native Meadville, Pennsylvania. This is the institution which later relocated in Chicago across the corner from our church. Shippen was an outstanding minister for eight years, during which the church building was enlarged twice, his salary was almost trebled, and the Music Committee spent a thousand dollars a year. Part of the reason for this prosperity was that the Society went from voluntary contributions to the renting of pews for support of the church, a system used in most denominations in those days. With this growth, the church decided to divide, and so it sponsored the Second Unitarian Church on the North Side.