During the great Chicago fire of 1871 the church served as a refuge for the homeless. Pews were converted into beds, and food was provided in the basement Lecture Room. English Unitarians came to the aid of Chicago Unitarians, sending nearly $12,000. When we Americans feel that we always are the givers in international transactions, we should remember the astonishingly generous English of 1871.

Although the building survived the fire, the Society moved south again, building an impressive Victorian Gothic stone structure seating 1,000 people, at Michigan Avenue and 23rd Street. It was completed in 1873 at a cost of $80,000.

A year later, Collier resigned for health reasons. Two years after that, Brooke Herford of Manchester, England, became our minister. He was a popular and powerful speaker, and he stipulated that we end pew rent in favor of voluntary contributions to support the church. The women’s organization of the congregation started a free kindergarten in 1881, probably the first free one in Chicago. They gradually expanded it and even erected a building for it — certainly one of the outstanding social services in our parish history.

William Wallace Fenn became our minister in 1891. He saw the church’s neighborhood declining, and soon recommended that a chapel for a mission be built near the new University of Chicago. He was encouraged to do this by William Rainey Harper, the first president of the University and a Baptist. Fenn led Morton Denison Hull, long-time trustee and treasurer of the church, to build the chapel as a memorial to his parents. This was dedicated in 1897. In 1909 we sold the downtown building and moved to Hull chapel. 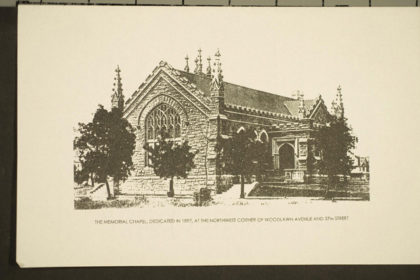 Fenn resigned in 1901 to become Busey Professor of Theology and eventually dean of the Harvard Divinity School. He was followed in the pulpit by William Hansen Pulsford, a Scotsman who had studied in Glasgow and Oxford Universities. He was an impressive speaker, but a poor organizer. He drew large crowds, but the congregation did not grow during his 22 years — the longest ministry in our history.